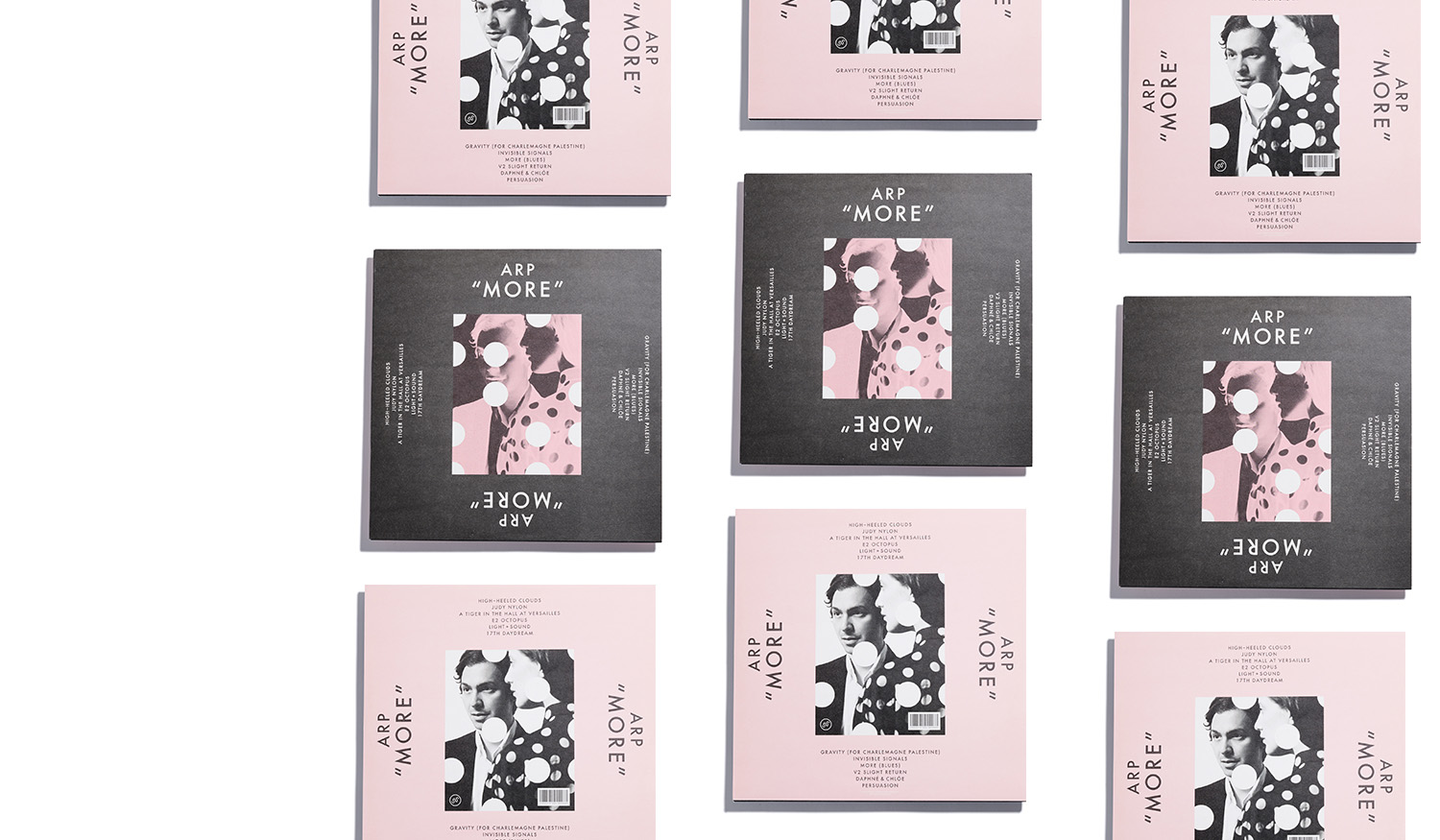 "You won't hear a better piece of Eno worship than ‘Judy Nylon’ this year."

"Last time we heard from Alexis Georgopoulos, aka Arp, he was deep in the analog synth obsession of the turn of the last decade and making music with British experimental composer Anthony Moore. Three years later, the New York musician is readying an album of painstakingly produced, walking-paced pop songs that one might easily mistake for a lost collaborative album between the likes of Brian Eno, Kevin Ayers and any number of long-haired, arty prog-rockers who made music out of Canterbury, England, in the late ’60s.

‘High-Heeled Clouds,’ the second single from MORE, moseys along New York’s Fifth Avenue just a few paces behind a window-shopping society lady, bouncing shiny pearls of social commentary — “‘Words,’ she says/’Lie like a knife in a drawer’” — off of a delightfully chunky bassline, hits of vintage organ and a perfectly La-di-dah chorus. You get a swirl of gritty atmospherics at the end, but for the most part, it’s the sort of lovingly researched music–nerd pop that you’d never expect a veteran noisenik of Arp’s ilk to pull off so precisely."

"We've been closely following Alexis Georgopoulos' Arp project since his 2007 debut release, In Light, which revealed him as a master of intimate and beguiling electronic textures that harkened back to the very best of 1970s kosmische music, while still being utterly contemporary. That album's follow-up continued on a similar trajectory, save the final track that perhaps signaled the completely new direction he'd forge on this astonishingly great new record. But before we get to the album at hand, we would be remiss not to also point out what was one of 2010's best and most undeniably beautiful releases, a collaborative LP on RVNG Intl. between Arp and Anthony Moore, the excellent British minimalist composer, for it's with that record that I have a feeling the inspiration for the radical shift we find on More began to germinate, as Moore was initially a "contemporary composer" who veered off into a very avant-pop direction, which in some sense is exactly what has happened here.

On More, Georgopoulos has largely ditched the introspective and percolating instrumental melodies in order to create a timeless and majorly ambitious experimental pop album that has as much to do with classic LPs like John Cale's Vintage Violence and Paris 1919, or the first two Brian Eno solo albums, as anything else going on presently. It's no mean feat to pull off, which is why hardly anyone ever attempts it, and which makes this record easily one of the most refreshing I've been privy to hear all year. There are still electronic textures to be found, sometimes as interludes, but more often they've been married or accented to this almost epically baroque sonic architecture that makes his new, direct songwriting and singing endlessly rewarding to explore. He doesn't entirely abandon his minimal bona fides, however, as one of the centerpieces of More is a driving six-plus-minute piece dedicated to Charlemagne Palestine that seems to marry interlocking and generative melodic piano patterns to the string section from Lou Reed's Street Hassle. It sounds so glorious you never want it to end. On other songs, it's as if warbly and weirdly phased guitars have been grafted onto some long lost outtake from Duncan Browne's Give Me Take You. When it comes down to it, I often feel jaded by songs lately and if nothing else, this album makes the case that you can still connect the past and future in surprising and affecting ways, and I truly can't recommend it highly enough."

"An album that could soundtrack a tea party at which Pink Floyd and Robert Wyatt are creaming the scones, while Sparks pour the tea."

"Alexis Georgopoulos took the moniker under which he makes music, Arp, from a defunct manufacturer of analog synthesizers. It was a fitting name for the kind of music the New York-based artist made on the albums In Light and The Soft Wave : instrumental outings with minimalist repetition and exploratory electronics that owed more to minimalist composers like Steve Reich and Philip Glass than anything resembling pop music. But on his new album, MORE, it becomes clear from the opening strains of the first track, “High-Heeled Clouds” — a dreamy ballad featuring breathy vocals, melodic keyboard lines and a hooky chorus — that Georgopoulos is taking the music in a more tuneful direction.

'It’s a song-based record for people who don’t listen to song-based records anymore,' said Georgopoulos, who described his process as 'a collision between what a singer-songwriter does and avant-garde experimentalism.' He credited the influential sounds of the Velvet Underground and early Roxy Music for his new style of songwriting, along with albums like Another Green World, by the titanic iconoclast Brian Eno, and cult figures like Kevin Ayers and Robert Wyatt. In the instrumental song “Gravity (for Charlemagne Palestine),” there’s a blurring of Georgopoulos’s present and past with wooshing synths, an insistent piano line and swelling krautrock rhythms. The song’s remix, by Peaking Lights, has its premiere here. The new track, which is part of a package due out Nov. 5 featuring retooled versions of MORE tracks by other artists, takes Arp’s sound in even more unexpected directions. 'It reminds me of Japanese mall pop like Yellow Magic Orchestra, or a New Order dub mix,' Georgopoulos said."

"‘More (Blues)’ has an early '70s rock thing going on, sounding like that something that may have come from a hypothetical Nico and T. Rex collaboration."